Working Beyond the Xfinity with Samba

Now that load balancing is operational, we still have an issue with Samba connectivity thanks to Comcast trying to protect us from ourselves.

This post builds on the part 1 of this series. If you have not read Multi-WAN + Xfinity + Samba - Part 1/2 and would like to setup a multi-WAN environment, jump back and read part 1 now. If you only want to setup VPN on the router and possibly get Samba working, keep reading.

Comcast’s list of blocked ports can be found here. Samba (SMB) is one of the services blocked by default.

I tried modifying my remote VM smbd ports and redirecting ports on the router but was not able to get Samba connectivity for unknown reasons.

Several posts on the internet suggest VPN for using Samba in a restricted environment so I gave it a try. I setup OpenVPN server on my remote machine using openvpn-install, a script by Nyr. During the script setup, it may not be obvious as per this issue, but make sure to enter the correct IPv4 addresses (interface versus public) when prompted by the script.

The OpenVPN server setup provides us with a *.ovpn client config profile that we can feed into the OpenVPN client in order to connect to the server.

Starting the OpenVPN client on my local workstation allowed me to tunnel my traffic through my OpenVPN server and get around Comcast restrictions to connect with Samba. 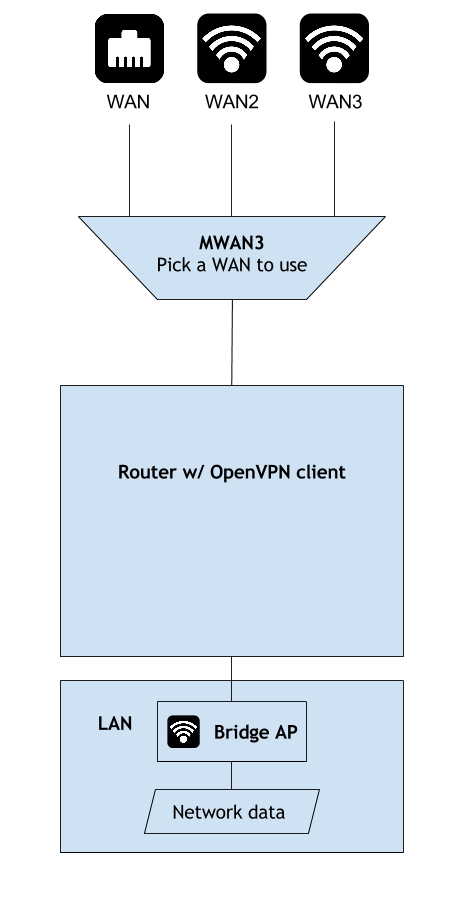 Actually there was a big issue when connecting to remote servers with VPN. I was using an AWS instance to host the OpenVPN server. Several internet web servers such as those of Google and Yahoo would refuse to connect when I web browsing through the VPN. Other sites such as Bing and CNN worked fine. Ping and DNS were successful for all sites.

It seems that some sites block certain AWS traffic. I spun up a VM instance on Microsoft Azure and setup OpenVPN server on that VM. The same sites that blocked AWS traffic turned out to not block Azure. VPN server blocking solved. 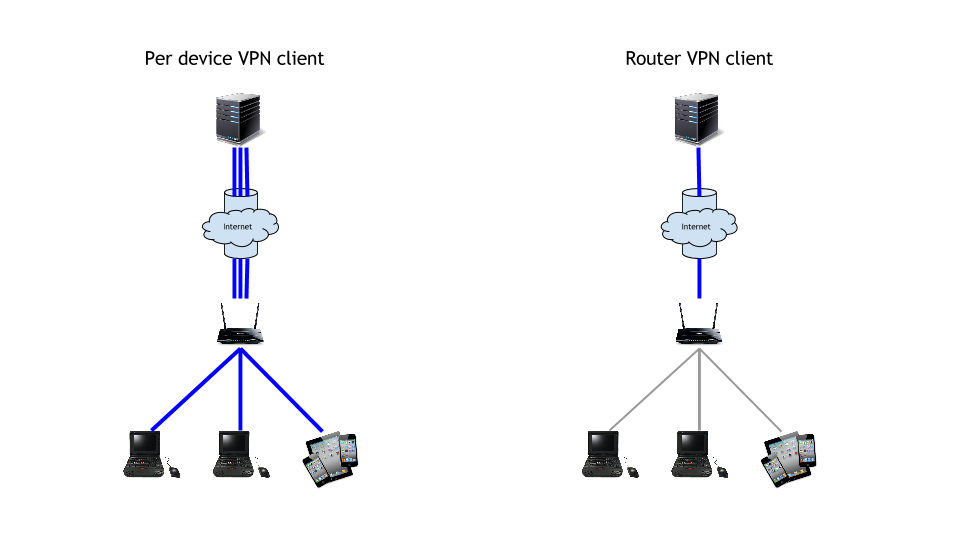 Logan uses the command line interface (CLI) because the installable web GUI version of OpenVPN was broken at the time of his writing. It has since been fixed, but you must run touch /etc/config/openvpn to pre-create the program’s config file if you do decide to use the GUI package as mentioned in this issue.

After installing and setting up OpenVPN on OpenWRT, I copied my setup OpenVPN server’s client profile to /etc/openvpn/ on the router.

When starting the OpenVPN client with openvpn --config /etc/openvpn/client.ovpn the created VPN connection hangs after a few minutes. The remedy for my setup was starting openvpn with the --mssfix 1300 option. ServerFault solution.

To manually start OpenVPN client in the background and persist after closing the shell we need to modify our command.

The final command looks similar to

Now you can manually start the OpenVPN on the router and all internet traffic will be tunnelled through your VPN server. Devices that do not natively support VPN are now secured. A lot less work than setting up OpenVPN on each device I wanted to use!

I decided to not start the client on router startup because a failed startup would leave me in an undesired connectivity status. Starting the client automatically can be left as an exercise for the reader.

When tunneling traffic VPN, I noticed that my 2x xfinitywifi speed advantage was eliminated and I was getting speeds comparable to not combining two wireless networks. VPN traffic was being routed to the VPN tun0 interface and openvpn was only utilizing wan2 -> radio0 for VPN traffic.

I was unable to figure out how to get openvpn to load balance over two WANs. There are many posts on the internet about done this the opposite direction, an OpenVPN server ultilizing multiple interfaces but no resources that I have found for the OpenVPN client.

Both programs modify routes /etc/config/network to work, mwan3 sets routes according to load balancing policies on system startup and openvpn adds a route for all traffic to go through tun0 by default. tun0 traffic is then handled by openvpn and I haven’t figured out how to configure the openvpn client actually utilize more than one WAN. I know that the client is still using more than one WAN because the VPN connection will disconnect when one WAN goes down.

I only need VPN for Samba connectivity. Samba operating at 1x xfinitywifi speed is acceptable for my purposes.

The solution for maximum throughput was configuring OpenVPN with a split tunnel. In a split tunnel we define rules that determine whether traffic should pass through the tunnel or not.

A split tunnel can be setup to a range of IP addresses with the --route network/IP [netmask] [gateway] option for openvpn. Any traffic destined for the specified network/IP address range will be routed through the gateway. OpenVPN command reference

Setup a split tunnel by adding the below to the end of the *.ovpn client config profile

where x.x.x.x is the IP address of our Samba server.

ONLY Samba traffic to my remote server will be sent through the VPN, all other traffic will be handled according to my multi-WAN policies and benefit from load balancing speed up. 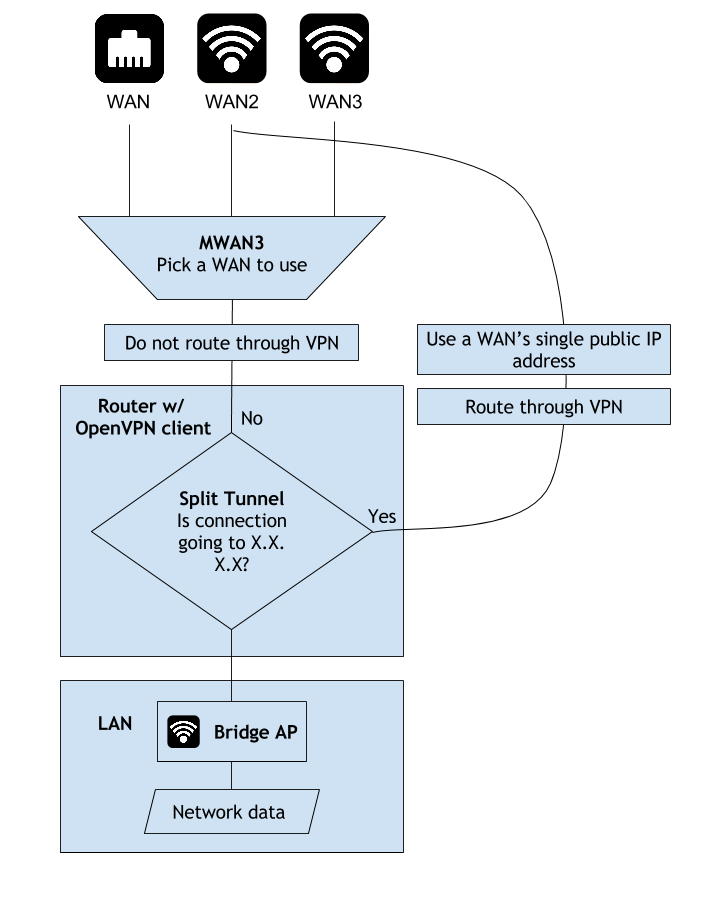 Lastly, the remote Samba server can be hardened by updating Samba, enabling encryption, and specifying minimum supported protocol. Add these options to /etc/samba/smb.conf on the Samba server immediately after the [global] line:

Does it wifi [again]?

After following the steps from the part 1 post and above, you should be able to access Samba over VPN while getting close to 2x or 3x speed for all other traffic.

If you run into problems check out the mwan, OpenVPN, and Samba documentation.

Let me know how it goes in the comments!