Changing the electronically controlled continuously variable transmission (eCVT) on my 2007 Ford Escape Hybrid at 220k miles. Ford considers the eCVT as “filled for life” so it’s not on the maintenance schedule (which ended at 150k miles anyways). The fluid has never been changed since it came from the factory 15 years ago. Let’s see the condition of the fluid!

The eCVT used in the 1st gen Ford Escape Hybrid is a simple drain and fill unit. Lowering the oil pan isn’t required and there aren’t any user accessible filters. The designers of this eCVT had good taste - both fill and drain plugs have the same size (10mm hex bit) and torque (30 lb-ft) specifications!

Proceed at your own risk! You are recommended to go to a certified dealer to service your vehicle. 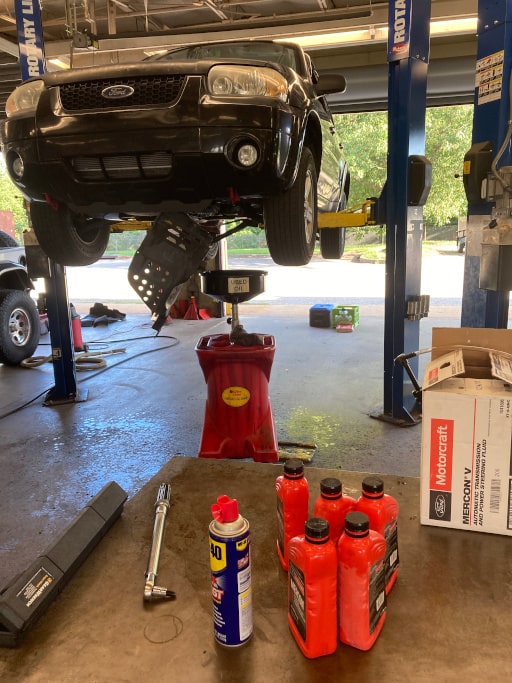 The old 220k eCVT fluid in my vehicle came out as a transparent medium brown color and smelled like something burnt. The new Mercon V fluid is a clear light red transparent color and smells like fish. Of note is that there weren’t many observable metal shavings like you might hear about for other vehicles’ CVTs. I did not take any pictures of the old 220k eCVT fluid because of oily hands and it drained very quickly.

The 2007 Ford Escape Hybrid ran much smoother after changing the eCVT fluid. I was getting an additional 2-3 mpg in fuel economy. Unfortunately the Escape was crashed by another car (more on that in a future post) during my break in/test drive so it was in the auto shop for 2 months before I could use it again, make benchmarking impossible.

Update 12JUL22 - After 9 months of monitoring the transmission temperature reported by an Ultragauge monitor has been 10-40 degrees lower after the eCVT and PTU fluid changes. The high temperature I see after hours of driving on a hot summer day is around 190F and the previous reported high temperature was 230-240F.