Looks like Tim Cook is going all in on iOS 7.

From my testing, in order to get the new iOS 7 UIKit elements in an Xcode project, IPHONEOS_DEPLOYMENT_TARGET must be set to iOS 7.0. Just building with the iOS 7.0 SDK with an iOS 6 deployment target will show a pre-iOS 7 UI.

Then again, this behavior might be because I extracted the iOS 7 SDK and DeviceSupport files out of the Xcode 5 beta and dropped them into an Xcode 4.5 which is setup to build triple binaries for ARMv6, ARMv7, and ARMv7s. 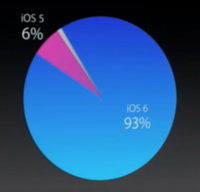 Okay Apple, I get it. You really want to kill off iOS 5. I know you think the brethren iOS 3 & 4 are deep sixed, too.

This lack of support is problematic as I’m currently aiming for iOS 3.1.3 and ARMv6 support in Geometry Stash’s next update. Users with older devices are left out in the dark by the majority of apps in the App Store due to Apple’s aggressive Xcode updates which silently, but effectively phase out ARMv6 and older iOS devices. Yes, usage charts show only a few percent of users running older iOS versions, but considering how many iOS devices have been sold and how many devices only support up to iOS 3 or iOS 4, this is a large enough amount of users to try to support.

“Try” is the keyword here, I currently don’t have a definite answer on older device support. The pre-release documents are not providing definite answers. There’re some mentions of getting existing apps to support correct layout in both iOS 6 and 7, but that is also public knowledge from the WWDC videos in case you’re wondering about NDA.

Even HelpShift, an in-app support framework which I am working to integrate into the update, does not have an ARMv6 library. Support at HelpShift mentioned how they would include a blank ARMv6 slice to the HelpShift library in the next update but I haven’t tested this yet to verify.

Maybe this matter be resolved in future iOS 7 seeds.