2/23/13 UPDATE - I forgot the Pebble charger at a location which I can only travel to once a week. I used my Pebble watch last Saturday and Sunday (2/16-17) and turned it off during the week until I could get the charging cable today (2/23). On Thursday (2/21) I tried to turn on the Pebble and it had no response) Today (Saturday), I plugged in my Pebble to the charger and it is still dormant. The Pebble watch cannot handle outdoor running and being turned off. Asking for a refund/exchange; will update on progress soon.

3/20/13 UPDATE - Pebble support has emailed me an RMA to replace the Pebble watch. Will be mailing it out this weekend.

4/20/13 UPDATE - Replacement Pebble arrived and has been opened. The watch is working so far, not sure if I will go running with it again though.

I took my new Pebble for a run last weekend and noticed some display issues possibly due to cold temperature. The Pebble support site states that the Pebble will function from -10° to 60° C.

The temperature during my run was -6° C and ~20 minutes. Afterwards, I took a shower in a heated building of ~38° C. A few minutes after the shower, I noticed wavy shadows snaking up and down the Pebble’s LCD screen, more on the screen later. 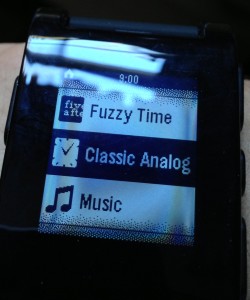 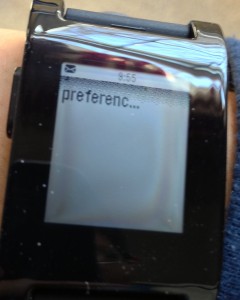 The first image is just out of the shower and while heating up breakfast. The second image is after about an hour indoors. The shadows began fading after 12 hours which is unacceptable considering that the watch was used within acceptable operating conditions.

The shadows did not fully disappear, either; remaining as a faint outline.

-6° C is obviously well in between the Pebble and LCD’s temperature ranges. Even if the Pebble’s circuitry failed, the Sharp Memory LCD should not have shown defects such as the shadow.

Perhaps it’s moisture from the shower? The Pebble is listed as waterproof up to 5 ATM. I’m pretty sure a standard shower does not clock out at 5 ATM of pressure.

Perhaps it was subject to too much physical activity? The Pebble site advertises future uses for the watch as a run tracker/keeper and other outdoors activities uses. Many people run with their watches on, too.

The Pebble probably could not compensate for an increase in temperature from the cold outdoors to a warm building. The shadows look as if the screen is warping at the dark points due to the temperature change. Considering we have waited about 9 months for this watch, it’s disappointing that the makers did not consider temperature fluctuations as an affecting factor of the watch. At least the watch is still useful for checking Uniwar. 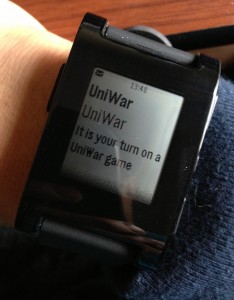 About Pebble’s screen from before…

Pebble’s Kickstarter page pitched the watch as having an “E-Paper” display.
NO.
NO.
NO.
Pebble watch does NOT, I repeat, does NOT have what most of us consider an “E-Paper” display. As said above, the watch actually uses a monochrome Sharp LCD screen.
This not the same technology as your ereader’s display. Your ereader display most likely uses a electrophoretic display which actually moves small metal particles into “on” and “off” postions to mimic a paper display. These displays can keep an image shown indefinitely without power. 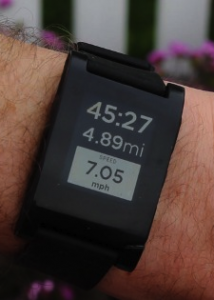 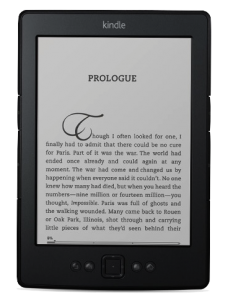 The Pebble on the other hand uses a low power LCD with is basically like the black and white LCD from your old school phone except with a higher resolution. Pebble’s makers claim “E-paper” by saying that the LCD is readable in the daylight and sun, etc. Just because an LCD is readable in the sun does not make it “E-paper”. If that was the case, any LCD with high contrast, a matte coating or anti-reflective finish could be called “E-paper” since it would be highly readable under many lighting situations. The “E-Paper” part of the watch was the primary buying factor for me. It feels like I have been cheated when the Pebble came with a normal LCD screen. Pebble’s creators should not advertise the Pebble as “E-Paper”.