Do you have a picture on your iPhone that you want to send to a friend? Is the latest media you took a video? Try firing up your messaging app to send the picture and looking at the Album thumbnail.

In this album I have a photo and video as the last media taken. 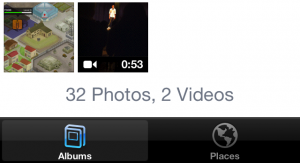 Case in point, if the user is looking for photo media, the video thumbnail is shown; confusion entails.

Apple should include an option for UIImagePickerController to adjust the thumbnails and title of the picker view to reflect the relevant media that the user is looking for.

A call such as source = photo vs source = video when the user only browses one type of media would suffice.

That being said, the the title of the album picker list in the first screenshot should not be “Photos”, but rather “Media” when the user is browsing for both types of media.